A popular excursion resort for just over a decade in the late 1800s, Luzerne Grove near Warrior Run often held picnics for a variety of labor, fraternal, and other organizations.

Owned by the Lehigh Valley Railroad, Luzerne Grove was a popular picnic and excursion stop in the late 1800s. The park was open from 1882 through 1893 and featured a variety of non-amusements including swings, merry-go-rounds, dancing pavilion, target shooting, and later an alley ball court. There may have also been a carousel. The park was located on the Espy Run siding of the railroad. Several contemporary accounts of the park note its popularity for excursions and picnics, natural beauty, and well-maintained grounds and facilities.

Heading from Fairview (Mountain Top) to Wilkes-Barre, the track turned westward on the north face of Penobscot Mountain and traveled past the Hanover Reservoir to an area near Newport, where the present-day Alden Mountain Road runs. Here the track made a fairly sharp curve back to the east and passed Warrior Run and Sugar Notch before heading into Wilkes-Barre. It was along this stretch of track, near Warrior Run, where the Espy Run siding was located.

An editorial appearing in a Kansas newspaper in 1883 described the park as opening in 1882 along a section of the Lehigh Valley Railroad on Wilkes-Barre Mountain. The article notes it was a large investment for the railroad company but was returned with passenger revenue as the grounds were often full of picnickers and groups holding their outings in the first two years of operation.

The success of the park in its first year may have helped the Central Railroad of New Jersey decide to open Mountain Park in 1883 along their own rail line. It was estimated that some 300,000 people visited the Wilkes-Barre area picnic grounds in 1883, including Luzerne Grove and Mountain Park. At the time, it was reported the Lehigh Valley Railroad was planning another park with a $25,000 investment in its facilities further up the line from Luzerne Grove with views of both sides of the mountain. However, it doesn’t appear that plan was carried out.

Labor and fraternal organizations, churches, and other groups often chartered excursions to Luzerne Grove. The Mount Pisgah Council of Jr. Order of United American Mechanics of Mauch Chunk held its first annual excursion to the grounds on August 24, 1883. The grove was reportedly “filled up with flying coaches, swings, and dance floor.”

The Lutheran Sunday School in Lehighton held a picnic the following August 1884. The park was advertised as “a splendid place to pass a day of good solid enjoyment.”

A personal letter from Chas. U. Weller to his cousin, Samuel Kern, in July of 1885 describes the fun had at Luzerne Grove at a picnic. Weller describes his outing in very positive terms, noting he got “lots of kisses” from several girls throughout the day, and encouraged Kern to join him at an upcoming excursion on August 22 at a cost of $1.75.

On August 29, 1885, the Caledonian Club from Wilkes-Barre held an excursion to Luzerne Grove, reportedly the largest at the park to that date with over 3,000 in attendance.

In 1886, Howard Smith from East Mauch Chunk moved his photography studio to the park for the summer season. On Ju;y 15 of that year, the Parnell Fund held its picnic at the grove. Knights of Labor Grand Master Workman T.V. Powderly gave a speech at the event.

Powderly would speak again several weeks later at the Knights of Labor picnic on August 23. 1886. It was reported over 4,000 attended the picnic, and Powderly’s speech made national news with quotes being shared in a number of papers across the country. He denounced violence caused by anarchists in the name of the Knights of Labor, saying it had no place in the organization. Powderly also cleared up rumors about wanting to run for political office, stating that even if offered the presidency of the United States he would not accept.

The Ancient Order of Hibernians picnic was held at Luzerne Grove on June 28, 1887. Returning home after the picnic, two prominent Nanticoke Democrats, John Smoulter and Lewis Moore, were attacked. Moore was critically injured, and at the time the assailants were not identified.

On July 19th, 1887, a “mammoth” four-day camp-meeting of the Pennsylvania State Temperance Union opened at the park, with workers from across the state in attendance.

An alley ball court was added at Luzerne Grove in August of 1890.

The Ancient Order of Hibernians of Pennsylvania held their annual picnic at Luzerne Grove on June 15, 1892, following a large parade in Wilkes-Barre. Preparations for their event notes that additional stands were erected at the park to accommodate the expected crowds.

A tintype photograph hand-dated July 20, 1892, shows just a glimpse of the times at Luzerne Grove. Although heavily faded, a small group of picnic-goers can be seen enjoying their day at the park. 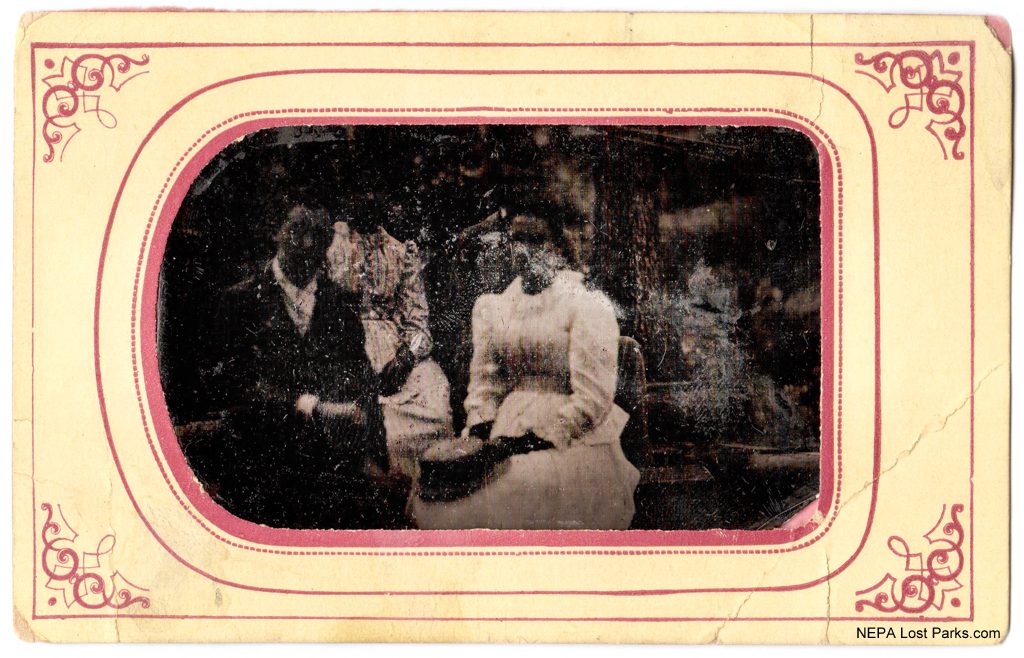 Just a few days later on July 23, 1892, the first annual excursion from Freeland to Luzerne Grove by the Owana Council, No. 47, Degree of Pocahontas was held. The train left the city at 7:30 a.m. and departed the grove for the return trip at 6 p.m. The cost of the excursion was $1 for adults, and 60¢ for children, advertised as the lowest rate yet for the resort. All kinds of amusements were available, including boat swings, merry-go-rounds, a baseball diamond, and “one of the finest ball alleys in the country.” Dancing music was provided by DePierro’s orchestra.

On August 31, 1893, a tragic accident took the life of a picnic goer. John Mosofski was loading a target gun when it discharged, the bullet hitting Thomas Zanowski in his left eye and entering his brain.

The Lehigh Valley Railroad announced in May of 1894 that Luzerne Grove would not be opening to the public that year. After the park closed, it is possible some of the equipment and stands were moved to the Lehigh Valley Railroad Picnic Grounds (later known as Hanson’s Park) at Harvey’s Lake, which was being developed around the same time. It is unclear if the carousel – if it existed – was moved there as well.

In April 1897, a broken wheel derailed a freight train at Espy Run near Luzerne Grove resulting in two brakemen being thrown from the train and injured. The Espy Run siding switch would be disconnected following a head-on collision between trains on the main track in the area in November 1898.

The Truesdale Colliery began operations on May 4, 1903, on a site known as Luzerne Grove, which was referred to as “practically a wilderness.” If built on land where the park was previously located, it likely wiped out any trace of the former picnic grounds.

A park known as Pine Grove was also reportedly operating in Warrior Run in the 1880s and 1890s. Located uphill from the end of the trolley line on Chestnut Street, the park was said to have a ¼ mile race track used for foot races, a dancing pavilion, swings, stands, and other picnic equipment. It is unclear if this is the same park as Luzerne Grove, or another picnic grove also located in the Warrior Run area.

It is important to note that Luzerne Grove was separate and unrelated to Mountain Park, which was located just outside of Wilkes-Barre along the Central Railroad of New Jersey’s tracks. The two parks are sometimes confused in modern sources as they were both located along rail lines, and both operated around the same time in the late 1800s.

Some of the excursions & picnics held at Luzerne Grove (see additional details on select dates in the article above):